MY WAY TO PERMACULTURE.

It was in the holiday of August 2008 that this new permaculture idea landed in my world. It landed on fertile ground. Not only did I already admire farmers, but I was also especially interested in animal husbandry.

In 2008 before the August holiday and while I was still at school, Rosemary Morrow, Dan Palmer and Amanda Cuyler, permaculture experts from Australia, visited my school, Mbuye Farm School in the Rakai district to talk to the students about permaculture. They had already implemented permaculture at Sabina Home and School.

They were introduced to us by Auntie Deborah. Rosemary gave us small tid bits of permaculture, but I personally I didn’t pay attention to what she was airing as even the mere word permaculture sounded so strange and different to me.

When the holidays came I was told that I would be spending it at Sabina. It did not please me at first because I did not go to primary school there and I was not used to life at Sabina. On the first day of the holiday a truck came to pick people up. In no time we were already at Sabina as Mbuye is near there.

The next day was Saturday. Auntie Deborah called on the holiday makers. She said, “Welcome”. “Thank you Auntie”, we replied. She added “Let me hope that yesterday you have toured around and you have seen what is taking place”. “Yes Auntie”, we replied. She continued. “Jan Smart came up with the idea that Sabina could grow some of its own food on the small piece of land we have, to supplement the children’s diet. Jan Smart is hoping for a lot of support from you, the holiday makers, in term of labour, so you will be helping in many activities on the project.” At this point, some of the big boys became unhappy because they were to be allocated activities, instead being left to do their own activities that might earn them pocket money.

The next day was Sunday, and in Uganda Sundays are meant to be free from any activity apart from cooking and bathing (indoor activities). So we were excused from working on the project. But I noticed that Dan and Amanda went on working and by the time we reported back from the Church, they had done much of the planting, stacking and many other permaculture activities.

Monday morning dawned with lovely bright morning sunshine. Among the activities I helped with that day were: making or building compost manure heap, transplanting seedlings from the nursery bed to the mandala garden, making/sharpening more stacks, making more vegetable and nursery beds, and constructing a simple bridge that could be used to cross the swale beside the mandala garden. My schoolmate Tony Obalim and I successfully constructed the simple bridge. That was my first real experience of helping on the project.

One Wednesday, when I was still new at the project something happened that almost made me stop coming back to the project. One of the boys on the project borrowed Dan and Amanda’s camera from the mandala garden without their permission. He took photos of all kinds that he loved. Amanda looked everywhere for the camera but everyone who was asked “Do you know where the camera is?” would answer “No”. I began to get worried that all the boys who had worked in the mandala garden would be suspected. This fear almost making me stop lending a hand: I fear and I hate being suspected of wrong doing. But thank goodness the boy who took the camera was seen taking snaps in the dormitory and this was reported to Auntie Deborah. So the camera was returned. This episode made me think a lot about whether I wanted to continue to work on the project. I did not want something dreadful like that to happen again. But I decided to continue giving a hand.

One day in the afternoon, as I was seated, I saw Dan digging a swale behind the dormitories. My brain was occupied with some thinking. Dan was alone and working so hard. I was not used to being around whites and I was also too shy to consult people older than me, such as Dan, so I feared giving Dan a hand but I really wanted to. I forced myself out of shyness and went to give Dan a hand. He welcomed me and gave me a shovel and he kept the pick axe, digging the swale as I shoveled. Later I took over the pick axe and he used a shovel. As we came to the end of our task, another boy, Obalim, joined us. That was my physical activity for that day but that was also my introduction to Dan. Soon I was working every day with Dan from early in the morning until sun set, doing gardening and other activities. My introduction to Amanda was when we were making compost manure heaps.

From then on, I realised that I could motivate myself to do any activity being performed at the project without any one having to ask me or persuade me. I was at last accustomed to helping the two volunteers. Eventually, Dan and Amanda started to leave me in charge of children in the garden when they were away in Kampala. I remember one morning when, as they were leaving for Kampala, Dan came very early and gave me a list of activities that could be done as they are away. All the activities were done by the time they returned, and more!

By the end of the holiday, I was a great helper on the project but eventually the time came for Dan and Amanda to leave. And after that the volunteers started to arrive and leave quickly: Mike Cloutier and Carl Jacobsen replaced Dan and Amanda; Kim Glasow and Clive Mullet plus Mrs. Anna replaced Mike and Carl; Ralph replaced Kim and Clive; Will replaced Ralph; Michelle Sabto replaced Will; Cam and Simon replaced Michelle; and finally Mr.Kalokola James and Mrs. Anna replaced Cam and Simon.

In January 2010, I was one of the three youngest participants in the 1st Permaculture Design Course (PDC) ever held in Uganda. I got my Permaculture Design Certificate. I was able to do this with the financial support of my Australian friends Michele Sabto and Andrew Trevillian. So I take this time to appreciate them for their support.

The teachers on the course were Rosemary Morrow, Dan Palmer, Amanda Culyer, Lindsay Dozoretz, Claudia and Rachel Otuyar. Doing this course has been one of the great highlights of my life. There were almost 50 participants from all over the world, including Canada, Australia, the UK, Kenya and Tanzania, as well as Uganda.

This has been my way to permaculture.

Posted by Nyero Christopher at 2:13 PM 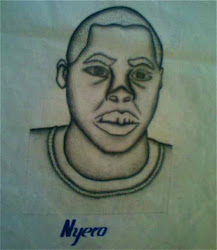